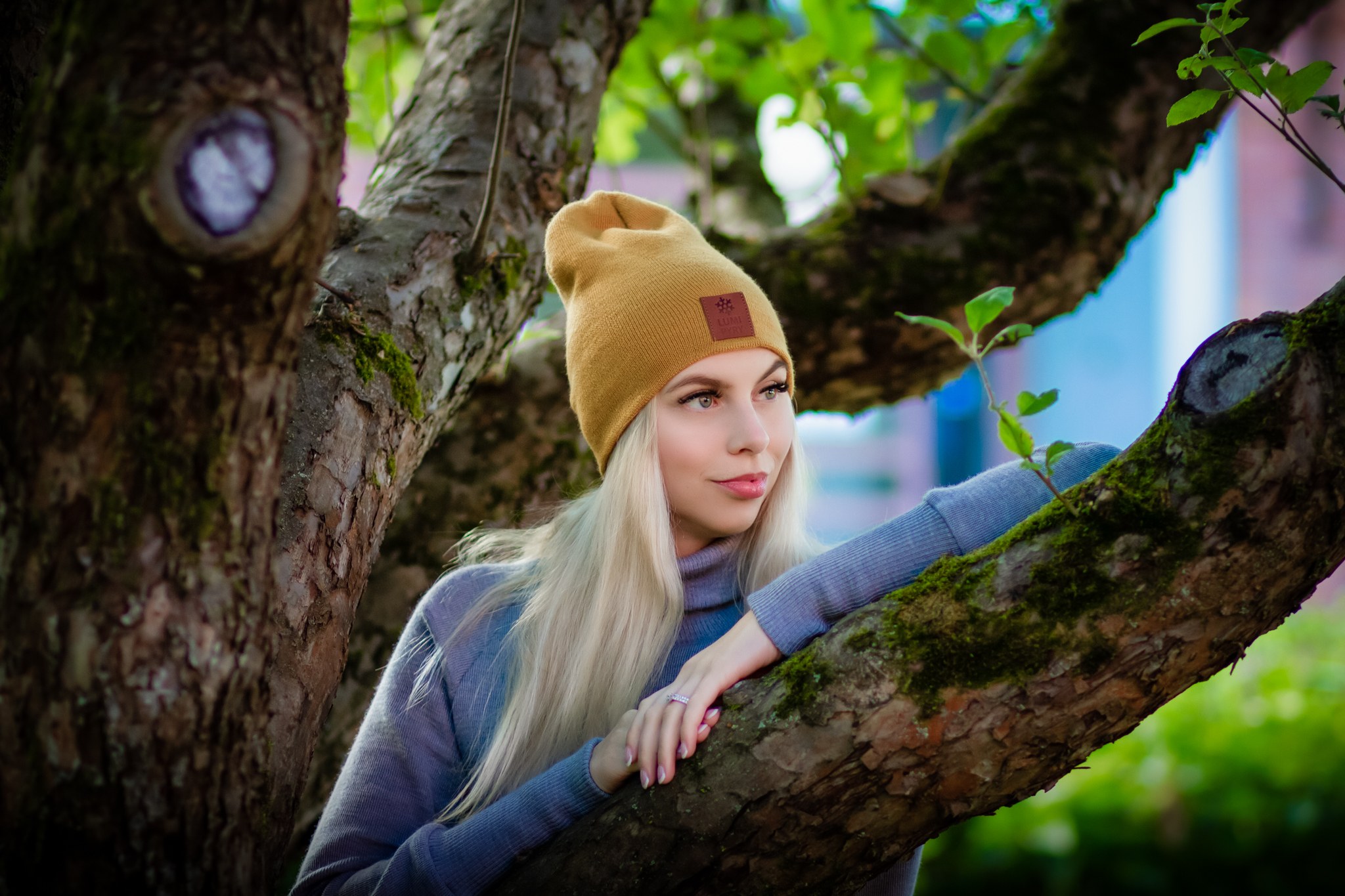 “I met Lumipyry’s owner Minna Uimonen about a year ago at the market. We were both selling our products. Minna as an experienced and I as a fresh market seller. Our places were next to each other. Minna put the place up in the flash, while I arranged the places even better throughout the day.”

“Market Day was quiet, so we had time to chat. Energetic Minna had a lot of tips on market practices, for which I was very grateful. I had time to get acquainted with Lumipyry’s wonderful merino wool products and hear about the company’s operations. I also ended up buying three merino wool pants for upcoming sailing trips. One for myself, one for my husband and one for my son.”

“Minna admired our shampoos and multi-functional eco-detergents. She ended up getting them for her family too. Minna also asked many questions about raw materials we use and productions. It was nice to tell her about Gaarna’s work and its values right from the root.”

“When the market day was coming to an end, Minna said they would need wool detergent. It should be sold together with merino wool products. Could we possibly make one for them? I replied without hesitation that – “Sure!”, And that’s where our collaboration with the wool detergent began.”

“The first batch of Lumipyry’s wool detergent was ready in just over a month. We produced pure olive oil soap for Lumipyry as a wool detergent. Thanks to the fat it contains, protein-containing fibers such as wool and silk retain their elasticity. Pure olive oil soap is also a completely natural option that does not strain the environment.”

If, while reading this, you came up with an idea or idea that you would like to go out with us to implement, then feel free to contact us. You can put a message, for example, by e-mail to; info@gaarna.fi, or alternatively send a message via Gaarna’s Facebook account or Gaarna’s Instagram account. It is always wonderful to be able to innovate a concept that serves a specific and new purpose..

Lumipyry is a small domestic company that manufactures merino woolen outfits. Their values are domesticity, ecology and sustainability. They weave all the fabrics themselves and sew the products in the weaving mill in Orimattila Luhtikylä, on a zero waste principle

Instructions for use: Rub the wool detergent moistened with dirt, leave on and rinse off or scrape 1 tablespoon into the washing machine and wash according to the wool washing instructions.

The product can be ordered from the Lumipyry webshop. 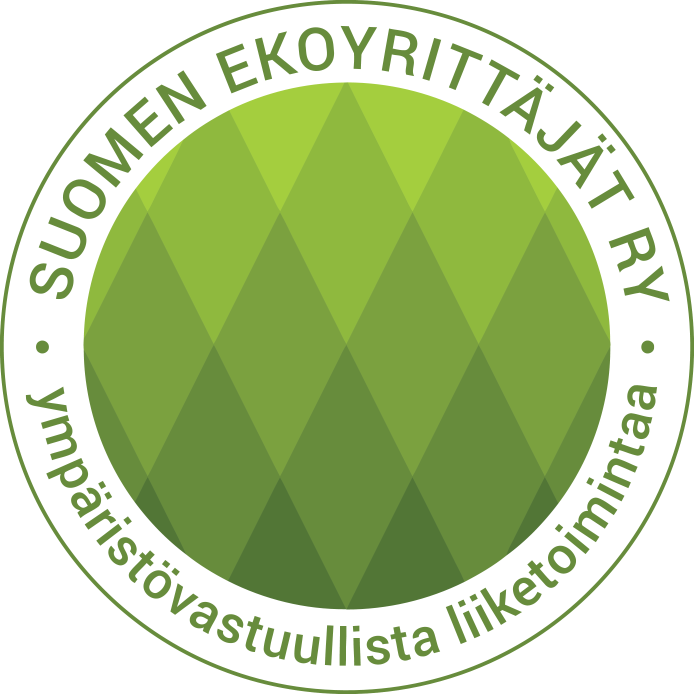 The purpose of the Finnish Eco-Entrepreneurs Association is to promote environmentally responsible small and medium-sized businesses. The members of the association are committed to the eco-ethical principles of responsible business in their operations. 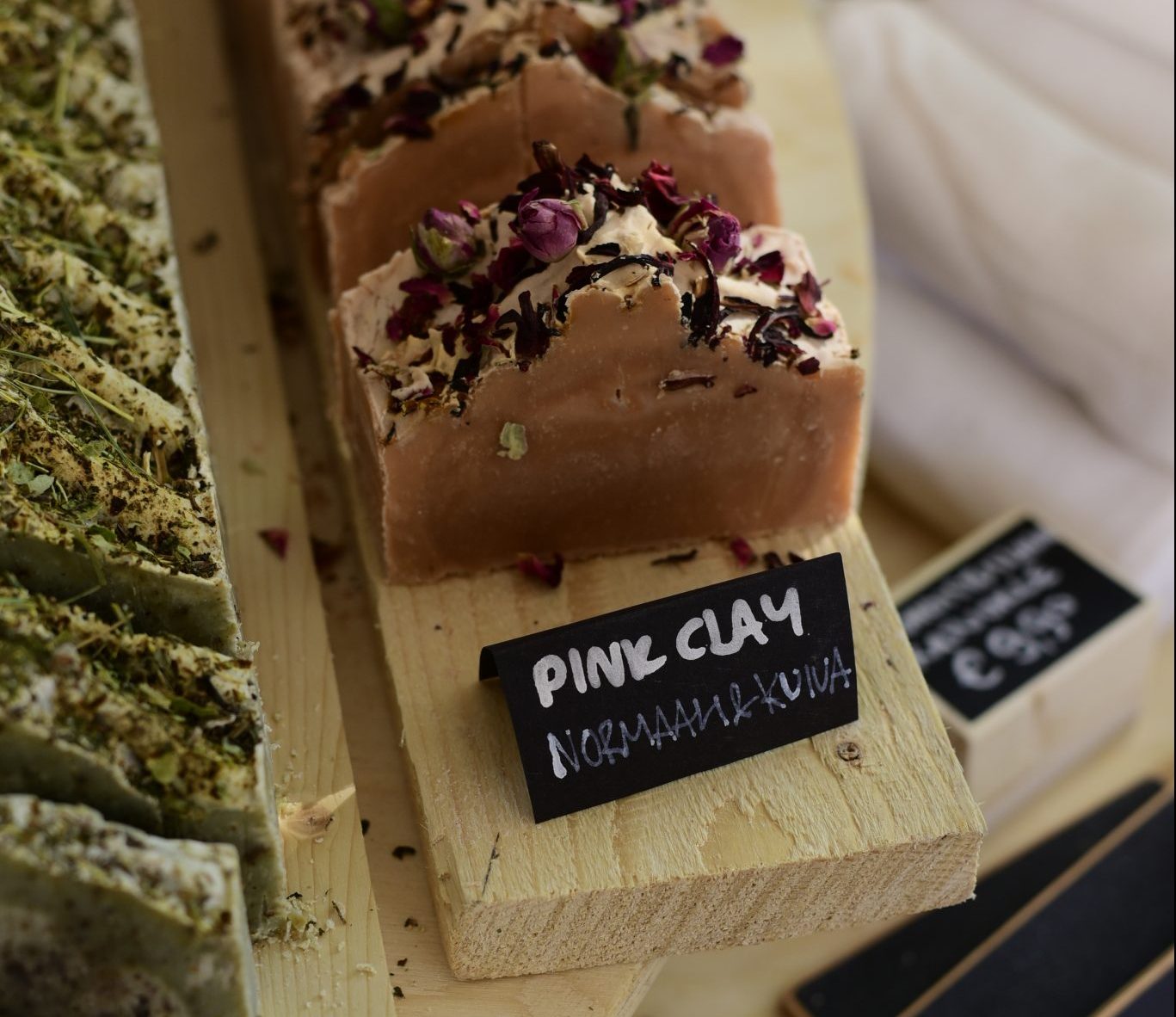 When good guys with different skills and inspiring ideas combine their skills, something new and interesting usually emerges. Not all new ideas are worth implementing, or even good, but diamonds are created every now and then. By doing and experimenting, it becomes clear in the end which idea was good and which was not.

One inspiring example of creative collaboration was made with Unit Markt. Unit Markt sells Gaarna eco-detergents in bulk. The selections include laundry detergent, dishwasher tablets, shampoos, soaps and conditioners.

Oona Jokinen, the founder of Unit Markt, got a wonderful idea to create a pop-up soap bar in the store. The soap bar would combine Unit Markt’s caring ingredients, such as clays and herbs, with Gaarna’s well-received shampoo-, conditioner- and soap recipes. Each product would be made with only a small special batch, and the design would utilize new shapes and colors to make the soap bar look eye-catching.

In addition to the wonderful, even delicious, whole, the customers were fascinated by the naturalness and beautiful appearance of the products. One eye-catcher was the whole blocks of clay soap, from which you could buy a piece just the size you wanted.

This was one good example of a collaboration that is sure to create something new. In fact, the new plans are already waiting for the next steps.

The collaboration project between Gaarna and Unit Markt is also an inspiring example of how two actors can achieve more together. We in Gaarna would not have had facilities to host a soap bar for customers, and these wonderful products would not have been born without Oona’s vision. On the other hand, we at Gaarna were able to excel in design, recipes and eco-detergent expertise – and best of all, be creative.

In addition to its own and partner products, Gaarna also manufactures products for other brands in the role of manufacturer. If, while reading this, you came up with an idea or idea that you would like to go out with us to implement, then feel free to contact us! You can put a message, for example, by e-mail to; info@gaarna.fi, or alternatively send a message via Gaarna’s Facebook account or Gaarna’s Instagram account. It is always wonderful to be able to innovate a concept that serves a specific and new purpose.

Unit Markt is a waste-free, sustainable choice convenience store in Vallila, Helsinki. The selection includes fresh vegetables, groceries, daily cosmetics and home supplies. You can follow Unit Markt on Facebook and Instagram and check out the products on their online site unitgoods.com. 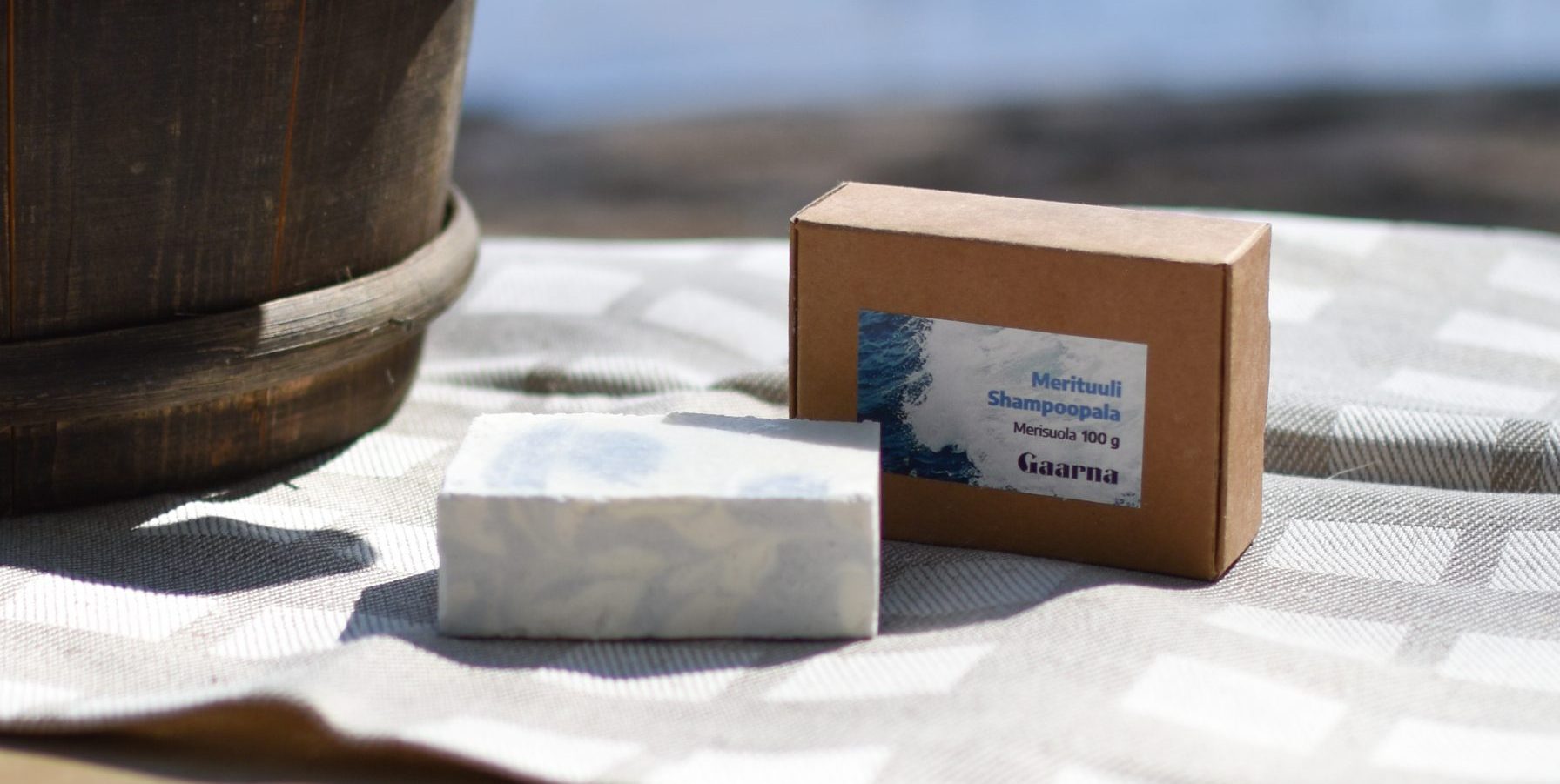 ”Sea Breeze is inspired by the Turku (City in Finland) archipelago, a family sailing trip and a beautiful summer evening by the sea. The hair was wonderfully puffy after fluttering all day in the fresh sea breeze and the desert island where we stayed the night smelled of lilies of the valley. I wanted to maintain this happy day in a shampoo bar and pass on the same, wonderful feeling to others. I hope you like it!”

“For us at Gaarna, being ecological is more than just production methods and ecological materials,” says Sini Kervinen, the company’s founder and entrepreneur.

But where exactly did Gaarna’s story begin?

“I’ve always been interested in the pure and natural alternatives to replace the artificial and industrial products.

Even as a child, my favorite game was to play chemist and a merchant. I made endlessly different mixtures of bath water and available shower products while sitting in a warm bath. I only agreed to come away when both the finger and toe heads were as wrinkle as the raisin. In my merchant play I just couldn’t get enough of organizing beautiful buttons that I had captured and collected in a jar like treasures. I sold them to family members for play money, torn from paper.

As I grew older, I became interested in natural herbs. I studied different plants and their properties. I collected them and dried them for tea, or dyed wool yarn with them. I read the literature on natural foods and studied the effects of harmful chemicals.

The birth of my first child, almost 10 years ago, made me even more interested in the ingredients in detergents. I wanted to live and be so that my own child would get only the best of everything. For both, as food and for skin. I also paid more attention to my own consumption habits and started recycling those that were still left behind.

Nature has always been close to my heart. Even though I was already doing a lot, it still felt like it wasn’t enough.

I got excited when a friend told me she had been making her own laundry detergent for a long time by grating Marseille soap and melting it in the water. I wanted to try it too. I also got a bottle of the detergent from her for to try it out. I washed my laundry with this gift detergent. I was actually quite good. I got fresh and clean laundry with detergent, that was so much better alternative to nature than the detergents I had used before!

I definitely wanted to make this kind of detergent myself too! However, I did not wanted to use industrially made, imported soaps. If one were to do it ourselves, then it would be done properly from the beginning. I found out and started making different soap products myself. I made both laundry soap and shampoo pieces. However, olive oil-based soap preparations did not clean the laundry, nor did the hair. I wasn’t happy with the outcome, but I knew I was on the trail of something important.

I studied more and did experiments over and over again with different recipes and different ingredients. On a few occasions I already gave up, but then tried again until I finally found perfectly cleansing vegetable oil-based recipes for both laundry detergent and shampoo.

The feeling was amazing when I realized I had created something really meaningful. I had created the way to wash laundry, body and hair safely without chemicals and environmental impact, ”says Kervinen.

We humans use huge amounts of detergents a month. And why not use – cleanliness and hygiene are important.

Most industrial detergents use a lot of substances that are not good for the environment. Various industrial combinations can be poorly degradable and bad for nature. The product information of laundry detergent does not have to indicate all the ingredients, which can make it difficult for the consumer to know what the detergent will eventually contain.

The detergent choices we make are of great importance. And not only for the environment but also for ourselves and our loved ones. By paying attention to what you wash yourself and your laundry with, you can do significant environmental actions over the years. At the same time, you remove huge amounts of completely useless chemicals from your daily life.

Gaarna’s work was thus driven by his own interest and inspiration, which led to concrete innovation. However, Gaarna also sells products to consumers.

Gaarna’s journey was thus driven by Sini’s own interest and inspiration, which led to concrete innovation. However, Gaarna also sells products to consumers.

“The more people use Gaarna’s eco-detergents, the greater the environmental impact is. That is one of the main drivers, that inspires me to develop even more products. Environmental impact, that Gaarna and those who have chosen to use Gaarna’s eco-detergents, are creating together is inspirational. I am grateful of every single order we receive. Each order symbolizes those people, who just like me, wants to make a positive difference. Every subscriber and every time products are used is a step towards a more chemical-free tomorrow.

Thanks are also due to the partners and manufacturers who are an important part of the journey. Thanks for the joint journey also belongs to anyone who cares.

Thank you for caring <3”